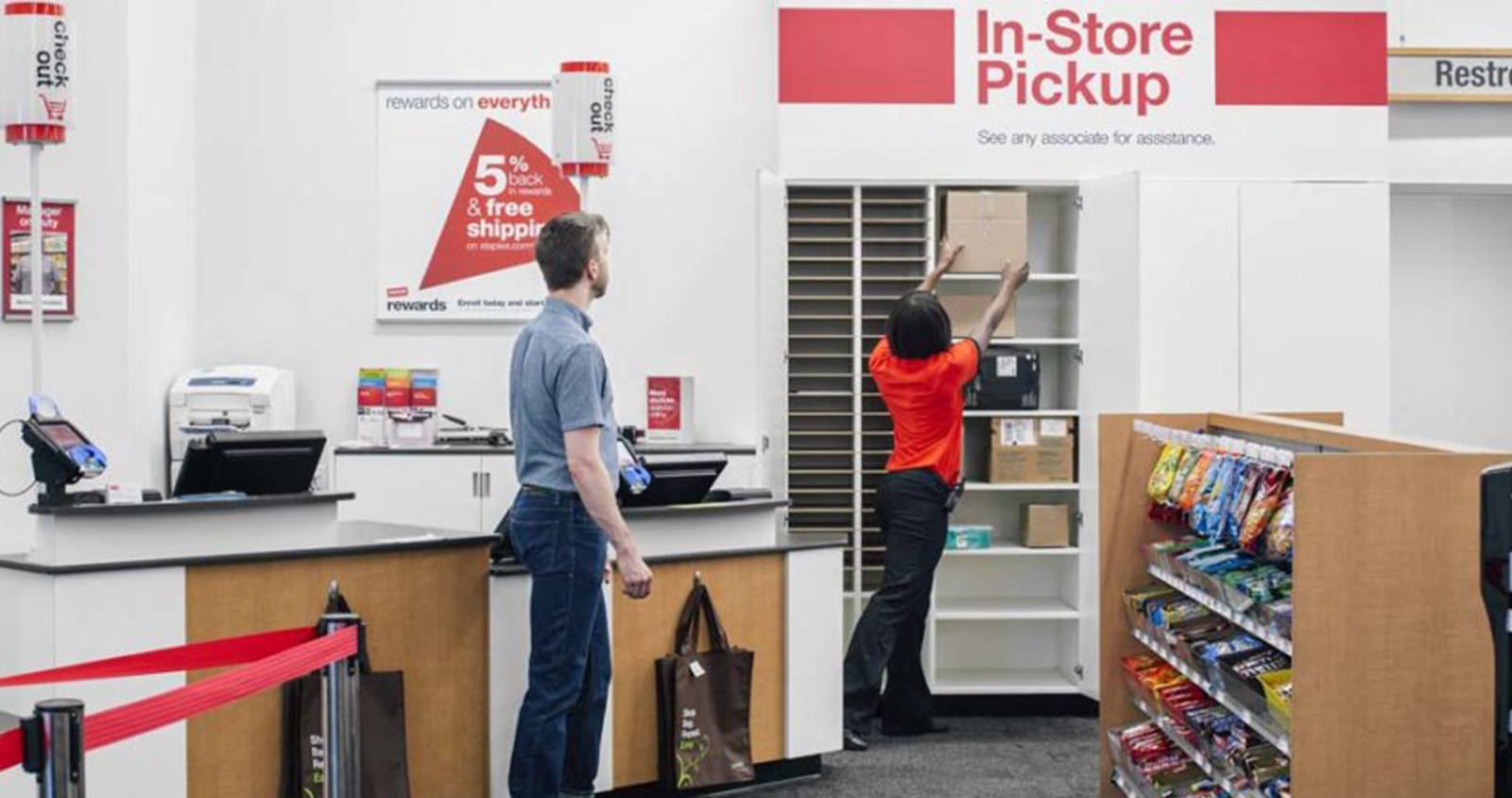 The BOPIS trend has been heralded as “the next big thing” in retail for the last five years, and yet it is estimated that less than a quarter of retailers actually offer it. Why is that? Stick around as we dive into the BOPIS trend, explore its numerous benefits, and discuss the challenges and best practices for its mass adoption.

Buy Online Pickup In Store (BOPIS) – also referred to as “click-and-collect” – is a retail feature that first began to gain steam in 2014. BOPIS gives stores both an online and a physical presence. At its core, it is simply the option of ordering an item online and picking it up in-store. Consumers can either pick up the item immediately (or within a few hours) if the item is in stock at the store, or the item can be shipped to the store to be picked up anywhere from 2-7 days later. Often times, shoppers will receive email or text alerts to notify them when their order is ready for pickup.

In terms of the actual pickup, stores will typically offer a separate booth for online orders, or they’ll direct people to the customer service desk. Other retailers, typically big-box retailers in more suburban areas, will provide curbside pickup services where customers can park their vehicle in a designated spot near the store and wait for an associate to bring their order out to them.

Shopper Use Cases and Benefits

According to a 2019 Coresight Research report, almost half of US online shoppers have collected one or more online purchases from a physical store in the past 12 months, with most BOPIS users representing a slightly younger and more affluent demographic than the average online shopper.

While most shoppers cite avoiding shipping costs as their main reason for using BOPIS, nearly 40% of them used BOPIS to pick up their purchases faster or to take advantage of a promotional offer, according to an NRF survey. Cost savings, expediency and convenience are thus the main reasons shoppers turn to BOPIS.

Another report from ICSC indicates that the trend is growing in popularity with 61% of click-and-collect users reporting that they take advantage of BOPIS frequently, and 47% saying they use it now more than they did a year ago.

And, what are shoppers buying with BOPIS? Apparel is the number one category, according to the same Coresight Research report from earlier this year. This should come as no surprise, as most apparel purchases at big-box retailers tend to fall below the free shipping minimum. Electronics rank second and groceries third.

One of the main reasons retailers have turned to BOPIS as a marketing tactic is that it naturally drives more traffic to brick-and-mortar stores. In addition to the boost in foot traffic, numerous studies have shown that most people who use BOPIS make an additional purchase during their pickup. According to a recent study by Total Retail, 85% of shoppers made an extra in-store purchase when they picked up items they purchased online, with 15% of them saying they did so “somewhat frequently”!

This is a sizeable increase from the conclusions in our own study from 2017, which found that 75% of consumers who used BOPIS bought something else while they were in the store to pick up their item. BOPIS is becoming a progressively reliable source of foot traffic and a valuable driver of in-store sales.

Furthermore, consumers aren’t the only ones who can save on shipping costs with BOPIS. If retailers adopt this trend, they can reduce delivery and fulfillment costs. E-commerce giant Amazon, for example, lost over $7 billion in 2016 on shipping costs alone!

Finally, if shoppers are choosing to BOPIS to avoid shipping costs, by not offering BOPIS, retailers run the risk of incurring abandoned online shopping carts, missing out on sales opportunities. In addition, a survey by Invesp found that 50% of consumers factored in BOPIS in their decision on where to shop.

So why are so few retailers offering BOPIS?

According to an Omni-2000 study of 753 US retailers, only 27.5% of stores currently have BOPIS – approximately 10% lower than the global average, putting the US far behind the UK and Nordic markets in their BOPIS advancement. Research by L2 and Forrester recorded even more conservative adoption numbers, placing North American retailers’ click-and-collect capabilities in the 20-23% range.

Retail chains larger than 250 stores are twice as likely as chains of 10-50 stores to offer BOPIS, with Target and Walmart among the most popular retailers to offer the service to their customers. The Coresight Research report found that half of US consumers who used BOPIS picked up goods from Walmart in the last year and 34% of them had used BOPIS at Target, as well.

One reason that smaller retail chains are not adopting BOPIS is the lack of access to order management systems (OMS). Most large chains have the resources to develop their own OMS solutions. However, smaller retailers are now gaining ground with the arrival of off-the-shelf OMS technology that is ready to use right out of the box. Thanks to this, the omni-channel capabilities (like BOPIS) of smaller retail chains is expected to grow in the following years.

Nevertheless, BOPIS still demands a sizeable investment in labor to implement. Retailers that offer BOPIS need to train their staff for in-store pickup orders. That staff may already be preoccupied managing standard online orders that need to be shipped out and/or need special training to manage BOPIS orders and ordering systems.

One of the best practices for retailers who are looking to include BOPIS in their toolkit includes promoting the feature more prominently on the website, especially the homepage (45% of retailers keep the service hidden until the checkout page – way too late to impact the customer’s purchase decision).

In addition to more prominent website placement, retailers should look into adding additional details, like the exact number of units left at a particular store where BOPIS is offered. Knowing that an item is in stock in a store near them may help drive them to purchase (and pickup). Plus, seeing that only a single unit is left in stock helps to create a sense of urgency, which could really boost sales if used effectively.

If new employee hiring and training isn’t workable in the budget, retailers who want to dip their toes in BOPIS, without the full investment, can try automated lockers. Automated lockers, like the ones deployed by Amazon at Whole Foods locations across the US, are a great, low-cost solution. They leverage the store’s physical location, all while streamlining (and speeding up) the pickup process for online orders and store associates are free to service in-store customers. Furthermore, lockers can be made available 24/7, offering an additional convenience to the increasingly demanding shopper.

BOPIS is clearly a mutually beneficial feature for both retailers and shoppers. For shoppers, it offers convenience, speed and no shipping costs, all of which can be major deciding factors on their buying choice. For retailers, BOPIS helps to drive store traffic, increasing the likelihood of impulse buys once a customer makes their way into the store. Ultimately, BOPIS provides retailers with a golden opportunity to make passive online shoppers fall in love with their store again!