This month, in light of Father’s Day, we decided to repeat the exact same QuickPoll™ survey using our phone charging kiosks and the results are in! We collected 1,900 survey responses from shoppers at PREIT malls across North America and here’s what we found: 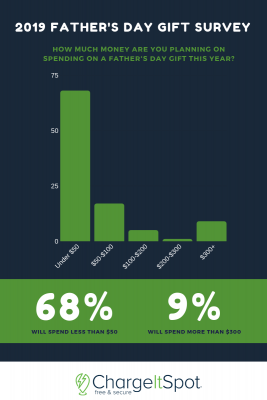 A whopping 68% of people said they were planning on spending no more than $50 on dad this year – which is in rather stark contrast to the 52% who chose $50 or under for mom’s gift. Consumers were also less likely to splurge on dad, with only 9% of respondents choosing the over $300 gift option, as opposed to 14% for mom. These figures are in line with general spending stats from the National Retail Federation who reported that Americans are expected to spend $25B on mom but only $15B on dad!

So what gives? One theory that explains why Father’s Day spending is less than Mother’s Day is that children are simply more likely to be living with their mom than their dad. Data from the Census Bureau shows that the percentage of children living only with their mothers tripled between 1960 and 2016. Another explanation is that gifts for mom naturally tend to be pricier: the cost of a bottle of scotch pales in comparison to that of fine jewelry or a spa treatment. Finally, another theory for the spending discrepancy is that it all comes down to marketing. Consumer psychologist Adam Ferrier recently told Fast Company that “there there is more emotion, and hence more margin to retailers embedded in emotional [eg. flowers] rather than functional [eg. power tools] gifts (…) Hence it’s easier for retailers to get behind a holiday that requires symbolic gift giving like Mother’s Day, as the gifts they stereotypically like lend themselves to more consumption and greater margins.”

Another interesting finding from our QuickPoll survey is that there’s relatively no difference in Father’s Day spending budgets between the genders. Daughters and sons have more or less the same gift budget as the graph below shows: 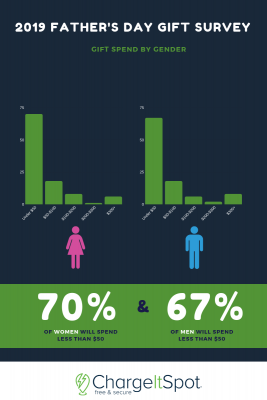 Again, this comes in contrast to the Mother’s Day gift spending poll which revealed that sons were much more likely to splurge on mom than daughters: 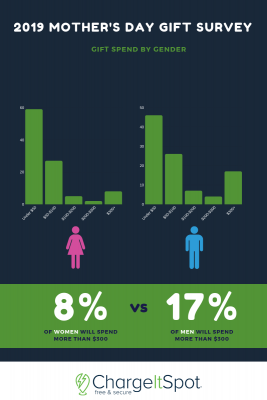 Furthermore, when you break down Father’s Day gift spending by age group, you’ll notice a remarkable homogeneity of results amongst all age groups – with the clear exception of seniors who had the largest wallets of all age groups! 47% of people over age 60 are planning on spending over $300 on their fathers this year (as opposed to approximately 9% of other age groups!). 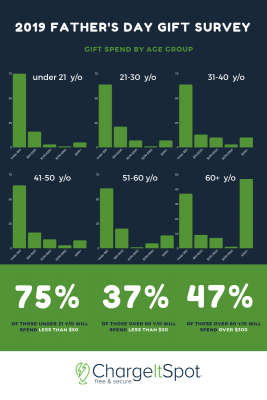 This discrepancy shouldn’t come as a surprise. If you’re over 60 years old and your father is still alive, he’ll likely be in his 80s or 90s. If your father is in the twilight of his years, splurging on a gift to honor his legacy seems only natural.